Rouxbe Online Culinary School https://plantdurance.rouxbe.com/ https://plantdurance.rouxbe.com/assets/logo/dark-7d6e4eb5603ef573242bfc74b5b7e369d476555f00d299a845d6375ff1596e13.png Founded in 2005, Rouxbe ("ROO-bee") is the world's leading online cooking school. Rouxbe offers instructor-guided certification cooking courses for cooks of all levels using intuitive learning technology. Courses can be taken on demand, at your own pace. Rouxbe can be found in the kitchens of homes, schools, restaurants and professional culinary academies in over 180 countries. 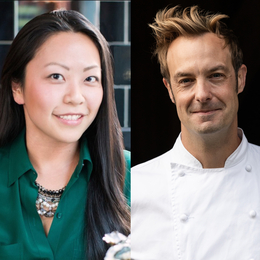 Join seafood expert Barton Seaver and his special guest Julie Qiu as they dive into the topic of bivalves: oysters.
Barton and Julie will discuss cooking techniques, sourcing and sustainability tips.

We will also share downloadable recipes and resources on how to incorporate seafood into your home cooking routine.

Julie Qiu is an international oyster expert and educator. She is the creator of In A Half Shell, an online guide to oyster appreciation for the bivalve curious and host of the Facebook/YouTube Live series, Around the World in 80 Oysters.

Barton Seaver is one of the world’s leading sustainable seafood experts and educators. He traded his illustrious career as an award-winning chef leading top seafood restaurants, DC, for traveling the world as an Explorer with the National Geographic Society. Barton translated his experiences into leadership in sustainable seafood innovations, garnering him positions with the United States Culinary Ambassador Corp, the University of New England, the New England Aquarium, and the Harvard School of Public Health. Barton works on initiatives to inform consumers and institutions about how our choices for diet and menus can promote healthier people, resillient ecosystems, more secure food supplies, and thriving communities.

An internationally recognized speaker, Barton has delivered lectures, seminars, and demos to a multitude of audiences. He has written seven seafood-centric books, including For Cod and Country and American Seafood and has contributed to dozens of publications, including Cooking Light, The New York Times, and Saveur, among many others. He has appeared on 60 Minutes, CNN, NPR, 20/20 and the TED Talk stage.

He is the founder of Coastal Culinary Academy, a multi-platform initiative that seeks to increase seafood consumption through seafood-specific culinary education for all levels of cooks.